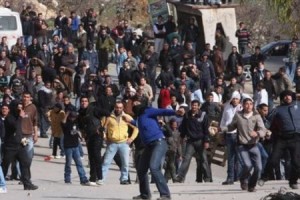 In the wake of a summer wracked by Arab-Jewish violence within Israel, in Gaza, and in the West Bank, security and local authorities in mixed Jewish Arab areas are bracing for a potential “perfect storm”: Yom Kippur and, lehavdil, the festive Muslim Eid al-Adha holiday falling on the same day.

While leaders in mixed-populace cities like Yerushalayim, Jaffa, Acco, Ramle, Haifa, Nazareth and elsewhere are trying to convey a message of reconciliation, the fact the two observances have such different characteristics makes that difficult: Yom Kippur involves 24-hours of fasting, tefillah and introspection, while, lehavdil elef havdalos, Eid al-Adha is a family celebration in which lambs are routinely publicly slaughtered for a feast.

The confluence occurs once every 30 years, and may occur again this year, on Shabbos, Oct. 4. While both religions base timekeeping on a lunar calendar, halacha stipulates the day and length of the fast to the minute, while Muslim religious leaders can decide on the exact date of the holidays based on the appearance of the moon, giving them some leeway.

The last three months have seen the kidnapping and killing of three Jewish teens, the 50-day Operation Protective Edge in Gaza and anti-Jewish rioting by Arabs in Yerushalayim, so there are no shortage of precedents for violence.

In Acco, as well as Ramle and Jaffa, special meetings were recently held between the city’s religious leaders in order to work out how to deal with the anticipated proximity of dates; each side is expected to ask its community to exercise restraint and respect the other side’s public spaces.

Acco is preparing to close the city to vehicular traffic and permit only pedestrian entrance, and Jaffa Muslim leaders agreed to a request to move a parade that was supposed to take place on Yom Kippur morning to after sunset, when the fast ends.

“If [public disturbances] occur, we – through the major forces that will be deployed here, and discretionary measures, whether implemented by police or local authorities – will deal with each case individually.”

Ramle Mayor Yoel Lavi, said that the municipality would work to increase awareness of the possibility that both holidays could fall on the same date.

“On the one hand, Jews will be fasting, and on the other hand, the Muslims will be celebrating,” he said, adding that he hoped that “raising awareness, as well as requesting discreet behavior on both sides – both by Yoel, as well as by Ahmed – will avert tragic events,” Lavi said.