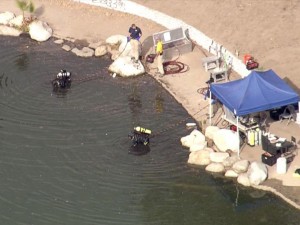 An FBI dive team was searching a lake Thursday near the site of the terror attack in San Bernardino, California — a spot where investigators were told the shooters spent time.

The FBI would not discuss the specific evidence it was looking for, but said it was seeking “anything that had to do” with the shooting.

One official has told ABC News that investigators are searching Seccombe Lake Park as a precaution, to ensure that no evidence was missed.

“In the end we may come up with nothing,” FBI Los Angeles branch Assistant Director David Bowdich said Thursday, adding that the search could take days. “We just don’t know yet.”

Bowdich added that there is no indication that anything in the lake poses a danger to the public.

The search comes after the FBI received information that the couple spent time at the pond, according to a senior official with knowledge of the investigation.

The dive teams are looking to see if they left or stored anything at the pond, the senior official said.

The investigators appear to be combing an area near the shallow edge of the lake. The water is so murky that divers cannot actually see through it, so they are largely feeling their way through.

The search comes eight days after the attack, which left 14 people dead and 22 injured. The number of injured increased from 21 because one of the victims didn’t realize at first that she was hurt, Bowdich said. She later checked herself into the hospital.

“At this point we continue to investigate this case as a terror attack,” Bowdich said.

Bowdich also addressed a 2012 terror plot in Riverside, California, in which four individuals were arrested and convicted of terrorism. He clarified that the plot was to join Taliban and fight overseas.

“There was never a danger to this community,” Bowdich said.