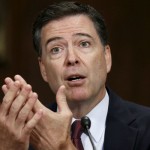 FBI Director James B. Comey told a Senate hearing that Islamic State remains intent on sending militants into the U.S. as well as inspiring Americans and visa holders already here to conduct attacks.

Europeans trained by Islamic State in Syria were largely if not entirely responsible for the attacks in Paris on Nov. 13.

Sen. Charles Grassley (R-Iowa), chairman of the Judiciary Committee, said the National Counterterrorism Center also has identified people “with ties to terrorists in Syria who are attempting to enter the United States through the refugee program.”

U.S. officials estimate that 30,000 people – including about 4,000 with European passports and dozens of Americans – have joined the conflict in Iraq and Syria over the last four years and could pose a long-term danger to the U.S. and its allies.

The total is almost double the number of foreign fighters who flocked to Afghanistan in the 1980s to fight in a war that spawned al-Qaeda.