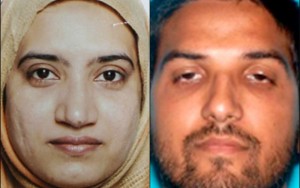 The radical Muslim couple who killed 14 people last week in San Bernardino were radicalized before they began dating, according to FBI director James Comey.

Investigators have reportedly discovered that Syed Farook and Tashfeen Malik were radicalized as early as the end of 2013, and that the pair talked about jihad and martyrdom before ever becoming engaged. For all we know, it may have been their mutual interest in radical Islam that clinched the shidduch between the two killers. Read it at ABC.