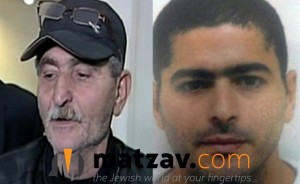 Muhammad Milhem, the father of the Tel Aviv terrorist, was arrested today after two of his sons were also arrested.

Along with his father, another 5 family members of the terrorist were arrested, Jerusalem Online reports.

“This just shows that the police have no leads,” said the family’s attorney. “They will arrest the whole family in the end.”

Yesterday, Muhammad Milhem publicly begged his son to turn himself in. “Reach out to me, I’ll help you,” he said. “Let’s put an end to this saga. Our family is suffering.”

Regarding the arrest of his 2 other sons, JO reports, the father said that they don’t have any connection to Nishat’s actions. According to the father, their arrests are just a way to try to pressure Nishat to turn himself in. “I respect the actions of the Shin Bet and the Israeli Police but I draw a line when they hurt my family members who aren’t connected to this matter.”

The terrorist’s father also stated that he doesn’t support Nishat’s attack: “I condemn this attack and send my condolences to the families of the victims. Also, I’d like to wish the injured a speedy recovery.”