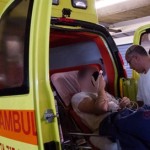 The youth from Long Island who was wounded in a terror attack while spending Shabbos in Chevron is returning to New York along with his father.

Eli Borochov was shot in the thigh by an Arab sniper and taken to Shaarei Tzedek Hospital. He was released from the hospital this afternoon, along with his friend who was also wounded in the same attack, Arutz Sheva reports.

“The bullet entered and left his leg. This was a great miracle from heaven,” Eli’s father, Ronen Borochov, told Arutz Sheva. “I don’t understand how it could be that the American embassy is not interested in the victim’s welfare even though the hospital updated them when it turned out that a Jewish American youth was wounded. They didn’t care at all.”