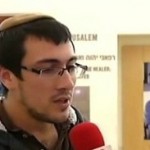 “We are fighting to save part of Yotam’s leg,” the Sitbon family, whose 15-month-old baby was wounded in a terrorist attack, told the Hebrew press this week.

Yotam Sitbon was among 14 Israelis who suffered various degrees of injury when a Palestinian terrorist rammed his car into a crowd of people waiting at a Jerusalem bus stop on Monday afternoon.

“We still don’t know what what’s going to happen,” members of the family said, as they prayed in the hospital where the toddler was undergoing surgery on his lower extremity. “It’s not clear whether his body is going to reject the [nearly severed] limb.”

Binyamin Sitbon, the child’s father – who immigrated to Israel from France six years ago — told a forum on the site Kikar Hashabat, “I was at work, and my sister-in-law phoned to say, ‘There was a terrorist attack; come quickly.’ So I grabbed a taxi and went straight to the hospital.”

His son, he said, “is a hero. It will work out, and he will be able to run again, God willing. My son and my wife were miraculously rescued. I still feel like this is a dream. I never believed such a thing would happened to me. I’m in shock.”

He concluded, “I hope my son will smile again.”