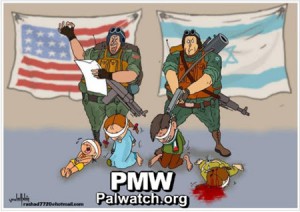 The Information and Culture Commission of the Mahmoud Abbas-led Palestinian Fatah faction this week posted a cartoon portraying Israel and the United States as terrorist entities who carry out and support executions of innocent Palestinian children, according to Palestinian Media Watch.

The cartoon on the Fatah-affiliated website—titled “Summary executions!”—shows an Israeli soldier pointing a gun to the head of a Palestinian child who is blindfolded and on his knees, next to another blindfolded child who is lying on the ground after being shot in the head. To the left, an American soldier hovers over another two blindfolded Palestinian children and reads a piece of paper aloud—similar to how terrorists read statements to justify executions. The American and Israeli flags are hanging behind the soldiers, illustrating the cartoon’s claim that those countries support the murder of innocent Palestinians.

According to Palestinian Media Watch, the cartoon is the latest example of how Fatah and the Palestinian Authority (which is also headed by Abbas) promote the conspiracy theories that Israel performs field executions of Palestinian children and that all terrorists killed by Israel during the current terror wave are “innocent victims.”