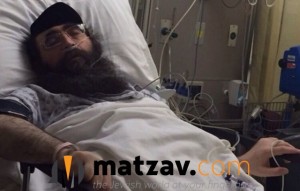 Following the decline in Rabbi Yoshiyahu Pinto’s health condition, the Shuva Yisrael community declared yesterday, the 6th of Marcheshvan, a fast day and day of prayer for his imminent recovery and success, Kikar News reports.

Photos of the rov in his hospital bed, connected to monitors and seeming weak and exhausted, were released by his close followers.

One of the rov’s followers spoke with Walla! News, saying that the disease has taken a heavy toll on Rabbi Pinto’s health, and the prolonged stay in the hospital has had a negative impact on him. The disease has caused infection to enter his system and is impairing his daily function.

Approximately two weeks ago, the rov had been retaining fluids and suffering from an infection. He underwent a procedure to drain the fluids and will continue with a course of treatment to remove growths that have metastasized.

All are asked to daven for Rav Yoshiyahu Yosef ben Zahari