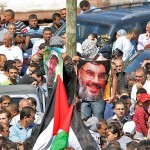 The family of an American man who was killed in 2006 by a Hezbollah rocket that was fired into Israel is suing Iran and three banks for funding the Iranian-backed Lebanese terror group.

Lelchook, a 52-year-old Israeli-American, was killed as he fled home on his bicycle in northern Israel during the 2006 Second Lebanon War between Israel and Hezbollah. Lelchook was originally from the Boston suburb of Newton and had been living in Israel for 20 years.

“Hezbollah is a proxy of Iran, which is up to ever more mischief,” said Robert J. Tolchin, one of two Brooklyn attorneys representing the Lelchook family, the Boston Herald reported. “David Lelchook was a 52-year-old man with another lifetime ahead of him, and that’s been taken away from him by a random missile. They call that war? They call that the way a nation behaves?”

Earlier this year a U.S. court ordered the Palestine Liberation Organization and the Palestinian Authority to pay more than $218 million for providing support for terror attacks that led to the deaths of several Americans during the second intifada.