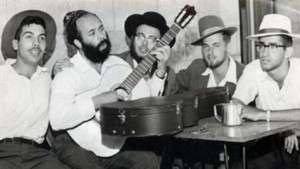 On Thursday, Kestenbaum & Company, a New York-based auction house specializing in fine Judaica will put up on the block what it says is a guitar that once belonged to celebrated composer and singer Rabbi Shlomo Carlebach, who died in 1994 at the age of 69.

“He impacted an extraordinary variety of people worldwide, encountering them in a diverse range of dynamic song-filled religious services, enthusiastic performance spaces and ecumenical retreats,” according to a statement by the auction house.

Carlebach’s guitar is being put on the block for $10,000-$15,000 on behalf of Rabbi Yehoshua Book, the guitar’s consignor. According to Kestenbaum, Carlebach gave the guitar in 1979 to Book, who is described as a “long-treasured friend and fellow music enthusiast and composer.”

“When Reb Shlomo presented to Rabbi Book this guitar from which he had played from for so many years, he remarked: ‘Without my guitar, I am bereft, I am as a guf beli neshama [a body without a soul],’” according to the catalogue.

And while Book said he feels bereft about parting with the guitar, it was necessary.

“I am not doing this with happiness. I am very sad, but now I have money problems with my family and my special projects in my community,” Book said. “I’m not happy to do it, believe me. If there was another way I’d do it.”

For Carlebach’s daughter, Neshama Carlebach, the sale strikes a sour note, however.

Also a musician, Carlebach told The Times of Israel neither she nor her family had anything to do with the impending auction sale. Moreover, they never heard from Book.

“Basically, these people claim they have my father’s guitar and they have decided to sell it,” Neshama Carlebach said. “Apparently there is a document that is witnessed and they are saying it is legit. I don’t know what I believe one way or the other, and frankly was a bit dismayed that they chose not to discuss this with the family at all,”

“I imagine the fact that a family member was not contacted in regard to this guitar simply underscores the fact that Rabbi Carlebach was a man who could never be contained by the dictates and expectations of others, even those close to him and whom he no doubt loved deeply,” Kestenbaum said in a statement.

Book confirmed he didn’t try to reach out to Carlebach’s family.

Kestenbaum described Carlebach as a man with a wide-ranging network of friends and associations that spanned the world.

“Close friends from Shlomo Carlebach’s yeshiva days in Lakewood and Lubavitch, many of whom he kept up with his entire life, wouldn’t necessarily be familiar to artists and musicians who were close to him in later decades when his focus was less traditionally Orthodox and more creatively spiritual,” Kestenbaum added.

As to the authenticity of the guitar, Kestenbaum said the auction house reviews hundreds of requests annually and works hard to ensure the full authenticity and provenance of the piece.

“Such was the case when the consignor of the Carlebach guitar came to see us,” he said. “Documentation was presented, background checks were undertaken and after being fully satisfied we have moved forward.”

The relatively low asking price for such a celebrated instrument is because of the extensive wear and tear. Its surface is heavily scratched “due to Reb Shlomo’s intense and energetic style of playing,” according to the catalogue. Also, the carrying case, which has remnants of airline travel labels, has been “extensively repaired and strengthened with tape.”