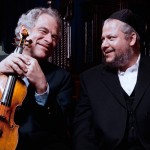 Famed Israeli violinist Itzhak Perlman will be among the 17 recipients of America’s Presidential Medal of Freedom next week. He is the fourth Israeli to receive the highest civilian honor in the U.S.

“A native of Israel, he came to the United States at a young age and was introduced to Americans broadly when he appeared on the ‘Ed Sullivan Show’ in 1958. Mr. Perlman made his Carnegie Hall debut in 1963 when he was 18,” a White House statement read.

Perlman was a soloist for several major film scores, including “Schlinder’s List,” for which he won an Academy Award for Best Original Score. He and wife teach young musicians through the Perlman Music Program. Perlman is also an advocate for people with disabilities.

“Through his advocacy and his example, he has been an important voice on behalf of persons with disabilities,” said the White House.

Other Jewish recipients of this year’s Presidential Medal of Freedom include film director Steven Spielberg.