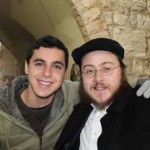 The Jewish community of South Padre Island, Texas, is mourning the loss of native-born Sgt. Sean Carmeli, one of thirteen soldiers from the Golani brigade who died in battle overnight in the Shejaiyah section of Gaza City.

Sean, known in Hebrew as Nissim, was born to Israeli parents-Alon and Dalya Carmeli-who had moved to the island in pursuit of business opportunities. With time, along with his parents and two sisters, he reconnected with his Jewish roots and began living a Torah lifestyle.

“Sean was a gentle kind boy,” says Rabbi Asher Hecht, director of Chabad of the Rio Grande Valley, who met the boy in summer of 2006 when he and a friend ran a day camp for local Jewish children. “He was the oldest of the local boys in our camp and was a sweet and kind example to everyone else.”

The Carmelis were leaders in the religious awakening that took place in the community during the first decade of the millennium. Within a few years, community members constructed a shul, hired a rabbi, and almost all of the members of the tight-knit community observe Torah and mitzvos.

Alon Carmeli purchased the community’s first Sefer Torah and dedicated the shul in memory of his father-in-law, Nissim Buganim, after whom his son was named.

After spending his summers in day- and overnight camps, Sean’s parents saw that their children were growing up without many Jewish friends and made the decision to move back to Israel, said Hecht. Sean, who held dual U.S and Israeli citizenship, completed high school in Ra’anana and went on to join the army where he served with honor and distinction in the Golani Brigade.

“Just before it was time for him to enter the army, Sean made a decision to spend some time in a yeshivah,” recalled Hecht.

“On a visit to Israel, my wife and I met up with Sean in the Old City in Yerushalayim where he was studying, and he told us just how excited and happy he was to be able to dedicate this important time in his life to Torah study, hoping that it would open his horizons and give him the right perspective before starting his army service and influence his life as a proud Jew.”

Hecht relates that when Sean was called up, his superior told him that he did not need to go to the front because of a wound on his foot. Sean, however, insisted on accompanying his comrades into Gaza.

In addition to his parents, he is survived by his sisters, Or and Gal.

Leave a Reply to please pray for them!!! Cancel reply