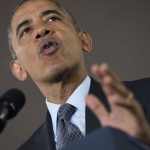 At the Congressional Black Caucus Foundation awards dinner in Washington, D.C. last month, an unidentified man posing as a congressman made it into a secure backstage area. In that area, members of Congress were gathering to take pictures with President Obama.

A member of the White House staff realized the man was not actually Representative Donald Payne Jr and asked to leave. (The man was not detained.).

The incident marks the third security breach in September: Days earlier, a man jumped the White House fence and made it in with a knife and an armed guard was allowed in an Atlanta elevator with Obama. Read more at Bloomberg News.