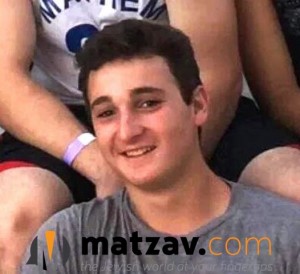 Massachusetts dignitaries and community leaders who knew Ezra Schwartz, the 18-year-old student killed Thursday in a Palestinian terror attack in Gush Etzion, remembered the Sharon native as a loving person dedicated to his Jewish roots.

“He cared about learning, he was dedicated to his Jewish identity,” said Rabbi Ron Fish, the spiritual leader of Temple Israel in Sharon where Schwartz was active as a youth leader. “He was the kind of person who would go and feed others – that’s actually what he was doing the day he was killed. And he was filled with hopefulness as he looked toward the future.”

Schwartz was returning to his yeshiva on Thursday after bringing food to Israeli soldiers on duty when his car was ambushed by a gunman, according to Israeli news website Ynet. He was among three people killed in the shooting. Seven others were injured before security forces surrounded and arrested the terrorist.

Schwartz was studying in Israel on a gap year between high school and college. At the Maimonides School in Brookline, where he graduated earlier this year, students were sent home early on Thursday, according to The Boston Globe.

“The entire Maimonides School community is profoundly saddened as we mourn the tragic loss of our recent graduate Ezra Schwartz, Class of 2015, who was murdered in a terrorist attack today in Israel,” said Naty Katz, the head of school. “Our thoughts and prayers are with Ezra’s family, classmates and friends.”

Camp Yavneh in Northwood, N.H., where Schwartz attended and worked as counselor, released a statement on Facebook saying its community was “heartbroken” at the news of his death.

“We offer our deepest condolences,” the statement said. “May the Schwartz family, the Camp Yavneh family, and all who Ezra has touched in his life be comforted among the mourners of Zion and Jerusalem.”

The camp’s director, Debbie Sussman said youths at the camp said Schwartz was “loved” and was “a great kid. A really sweet guy.” Sarah Salinger, a longtime friend of Schwartz’s who went to camp with him, said the teenager had a compassionate and uplifting spirit.

“Ezra was caring, kind, silly, and always wanted to make those around him laugh,” she said. “Ezra always had the right intentions and will always be my best friend.”

Following news of Schwartz’s death, dozens gathered inside Young Israel of Sharon, an Orthodox synagogue near his family’s home, and offered prayers for Schwartz and his relatives, The Boston Globe reported.

Massachusetts Congressman Joe Kennedy III posted on Twitter his condolences to the Schwartz family. He wrote, “My heart is broken for the family of Ezra Schwartz and all those who knew and loved him, from Sharon to Brookline and across MA.”

At Yeshiva University in New York, where many students knew Schwartz, Rabbi Kenneth Brander sent a letter to students describing the teenager’s death as a “great darkness.” He said many students felt “a sense of pain and bewilderment” after news broke of the tragedy.

US Senator Chuck Schumer added words of condolence over those killed in Thursday’s attacks in Israel. He noted that he was particularly saddened by news of Schwartz’s death.

“He was an innocent, gunned down in cold blood and his despicable murder will only deepen the resolve of the United States to stand arm-in-arm with its ally, Israel, in the global fight against just this kind of terrorist violence,” Schumer said.

The senator called on Palestinian Authority President Mahmoud Abbas, other Palestinian and world leaders to condemn terror attacks against Israel. He also urged Palestinian leaders to seek to cooperate with Israel in reducing the violence and forging a “path to co-existence.”