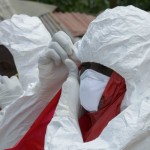 An Israel researcher is warning that the economic and societal breakdown that might accompany an outbreak of the Ebola virus in Israel, might be even worse than the infected cases themselves of the potentially lethal virus, Israel’s NRG News reported Monday.

According to Professor Leslie Lobel, of Ben-Gurion University of the Negev, “the damage that could be caused to Israel – or any western state – from the discovery of the outbreak could be massive.”

“Imagine what would happen if it was discovered in Tel Aviv,” Lobel said of Israel’s business and cultural center, containing, including the surrounding Gush Dan region, a full third of the country’s nearly eight million residents.

“The economy would come to stop; people would be afraid to go out on the street. There would be damaging hysteria, that would immobilize commerce,” he cautioned, positing a nightmare scenario.

“The same thing would happen in many European countries if Ebola would be discovered there. Imagine how the residents of Paris would react if it was discovered there – the hysteria would be immense,” Lobel warned.

A Jerusalem hospital said Friday that a Nigerian woman was being tested “for possible Ebola,” after she was admitted for a fever, according to Reuters.

The 28-year-old Nigerian health worker arrived in Israel several days ago, and was admitted to Shaare Tzedek Medical Center and was placed in isolation, a hospital spokeswoman said.

“It is possible that she is suffering from another viral complaint, but we are taking every precaution while we determine whether this could be Ebola,” the spokeswoman said, adding that test results were expected by Saturday. The Health Ministry said it was monitoring the case. It is unclear what the woman’s status was as of Monday.

In light of the increasingly frightening prospects, Prime Minister Benjamin Netanyahu, on Monday afternoon “convened a discussion on the State of Israel’s preparedness for dealing with the Ebola virus,” his office said in a statement.

“Health Minister Yael German, Transportation and Road Safety Minister Yisrael Katz and Deputy Interior Minister Fania Kirshenbaum – as well as representatives of the Israel Police, Airports Authority and the Foreign Ministry – participated in the discussion,” according to the release.

“Health Ministry officials presented the current global situation regarding the spread and transmission of the Ebola virus. It was noted that the countries in which there is the greatest concern over the spread of Ebola are Liberia, Guinea and Sierra Leone. Accordingly, it was decided to increase efforts to locate persons entering Israel from those countries; the Foreign Ministry and the Health Ministry have urged Israelis to avoid traveling to them,” the release read.

Additionally, Foreign Ministry Director-General Nissim Ben-Shetrit updated those in attendance on the decision to send three mobile clinics to the affected areas in western Africa.

MASHAV, Israel’s Agency for International Development Cooperation, will send the clinics to areas in western Africa where there is a high risk of infection with Ebola, the Ministry of Foreign Affairs said Sunday.

“In response to requests by many governments, the Secretary-General of the United Nations, the Director-General of the World Health Organization (WHO) as well as Israeli and international aid organizations, the Foreign Ministry has decided to increase Israel’s contribution to the international effort to prevent the spreading of the Ebola epidemic,” according to the ministry.