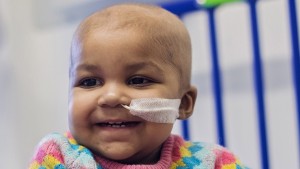 A one-year-old girl who was suffering from “incurable” leukemia has been cleared of the cancer after becoming the first human in the world to try a new, experimental “off-the-shelf” therapy that creates designer immune cells.

Layla Richards had the treatment at the Great Ormond Street Hospital (GOSH) in central London earlier this year, after her parents insisted the doctors try anything to save their daughter from dying. The parents had been told there were no options left to save their baby as her leukemia was extremely aggressive and didn’t respond to chemotherapy or bone-marrow transplants.

But then they got a chance to try out an experimental gene-editing treatment being developed at the hospital. It had only been tested on mice, never on humans. The therapy involved giving Layla genetically-altered immune cells that attack the leukemia cells while leaving healthy tissue alone. The treatment works by adding new genes to healthy donor T-cells, differing from other gene therapies that use cells from the patient itself. T-cells are white blood cells that have a key role in the body’s immune system.

Two months later, Layla was cancer-free. She is now back at her home with her parents, according to a statement on Thursday from the hospital where she was treated.

“As this was the first time that the treatment had been used, we didn’t know if or when it would work and so we were over the moon when it did. Her leukemia was so aggressive that such a response is almost a miracle,” said Paul Veys from GOSH, who led the team treating Layla.

The company behind the so-called gene-altering TALEN technology, Cellectis SA ALCLS, +13.30% CLLS, +4.53% also put out a release on Thursday, saying it aims at making the product accessible to anyone.

“We expect to accelerate our clinical development of TALEN gene-edited allogeneic CAR-T therapies to further confirm this encouraging clinical proof of concept,” said Mathieu Simon, Chief operating officer at Cellectis, in the release.

Shares of the company jumped 11% after the news on Thursday and marched 3% higher in Friday’s trade.

Normally the patient’s body would reject cells from someone else, but the scientists at GOSH managed to tweak the DNA, so Layla’s immune system didn’t fight back at the treatment.

Now the scientists must run further clinical trials to test if the TALEN technology can be used on a larger scale, but one immunologist is optimist.

“We have only used this treatment on one very strong little girl, and we have to be cautious about claiming that this will be a suitable treatment option for all children. But, this is a landmark in the use of new gene engineering technology and the effects for this child have been staggering,” said Waseem Qasim, a professor of cell and gene therapy at the UCL Institute of Child Health and a consultant immunologist at GOSH.

“If replicated, it could represent a huge step forward in treating leukemia and other cancers.”