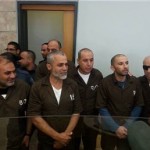 Palestinian security prisoners released as part of the 2011 Shalit deal and expelled to Gaza, Qatar and Turkey have been working to form terror cells in the West Bank and east Jerusalem to launch attacks against Israel, Hamas sources told Ynet on Thursday.

The expelled Hamas prisoners use connections they made before they were arrested, providing their contacts in the territories with funding and guidance.

These operations are led and financed by the head of Hamas’ West Bank Division, Saleh al-Arouri, located in Turkey.

The Hamas source also said that Gaza’s rulers are pushing for suicide bombings in the West Bank and east Jerusalem, but so far these attempts have been unsuccessful.

The expelled prisoners have also formed a shadow organization to lead protests, marches and clashes with Israeli security forces, as well as encourage incitement.