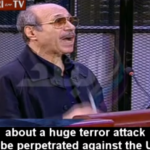 In the weeks ahead of the September 11 attacks in 2001, Egypt warned the Bush administration repeatedly about an imminent large-scale terror attack to be carried out by al-Qaeda operatives on US soil, but the message was ignored, a former high-ranking Egyptian government official said.

Habib al-Adly, who served from 1997 to 2011 as minister of the interior for the Mubarak government, said in court testimony that Egypt received intelligence “from inside the al-Qaeda den” that “America would be subject to a huge terror attack.” In testimony last month that was translated and posted online Tuesday by the Middle East Media Research Institute, Adly said the intelligence was verified and analyzed, and then president Hosni Mubarak gave the order to pass it on to the US in May of 2001.
The information was passed to both the CIA and FBI several times, Adly said, as Egyptian intelligence received word that the terror attack was moving from the planning to operation stage.

Later, in 2002, Mubarak met with president Bush and asked why the US hadn’t heeded Egypt’s warnings, but Bush said he had no knowledge of the intelligence.

Adly testified: “In 2002, when President Mubarak traveled to America, he asked President Bush why they did not heed our warning about the attack. Bush asked: ‘What attack?’ Mubarak answered: ‘Against the WTC.’ Bush said ‘We didn’t get it.’ Mubarak answered: ‘Yes, you did.’ When Bush said that this never happened, Mubarak said to me: ‘Habib, did we warn them or not?’ And I said we did. I told him that we had warned the CIA, and he said that he would tell them. The CIA told Bush that they had received no warning about the attack, but Mubarak insisted that we had warned them.”

Eventually, al-Adly said, the CIA admitted it had received a warning, but “said the warning hadn’t been in writing” and evidently wasn’t passed on.