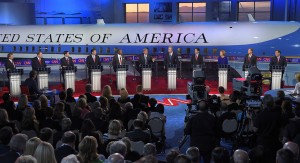 When is the next Republican presidential debate?

The third Republican presidential debate—titled “Your Money, Your Vote”– will be Wednesday, October 28, live from the Coors Events Center at the University of Colorado in Boulder, which is used to hosting 11,000 fans for U of C basketball games. The debate will begin at 8 p.m. Eastern Time.

How long is the debate?

After days of tense negotiations between candidates and CNBC, the debate is set to run two hours (including commercial breaks). Originally expected to be another marathon session, CNBC acquiesced to the demands of several of the contenders eager for a more succinct session.

How can I watch the debate?

The debate will air on CNBC, which says it reaches more than 100 million homes in the United States and Canada.

Does this debate have a theme?

CNBC says the debate will pay particular attention to economic issues, including taxes, retirement spending, and job growth. CNBC also says tech policy will come up in the questioning.

Who will participate in the debate?

Who will participate in the 6 PM debate?

How did CNBC decide who will be in the debate?

Even though Carson has polled well in the past week in Iowa, that doesn’t change his median standing in national polls. Because of the way CNBC averaged these national polls, Carson will appear next to Trump, the man at the top and in the center.

Where will they stand on stage?

Donald Trump, the highest polling candidate with an average of 25.22 percent, will stand center-stage for the debate, though with an even number of candidates, Carson also will appear in the center, polling at 19.78 percent. To Trump’s right will be Rubio, Bush, Huckabee, and Kasich. To Carson’s left will be Fiorina, Cruz, Christie, and Paul. There will not be a podium reserved for Joe Biden.

Who will moderate the debate?

There will be three moderators, all from CNBC: John Harwood, the chief Washington correspondent, Becky Quick, co-anchor of the Wall Street-focused show “Squawk Box,” and Quick’s co-anchor, Carl Quintanilla.

When is the fourth Republican debate?

The fourth Republican debate is scheduled for Tuesday, November 10—one year from Election Day. It will take place at the Milwaukee Theater in Milwaukee and is hosted by the Fox Business Network and the Wall Street Journal. No moderators have been announced, but Fox says the discussion will center on “the general health of the economy.”

When is the next Democratic debate?

With a field of just three, the next Democratic debate will be in Des Moines, Iowa on Saturday, Nov. 14. It will be hosted by CBS News, KCCI-TV and the Des Moines Register at Drake University and is the only Iowa-based debate before the Feb. 1 caucuses.