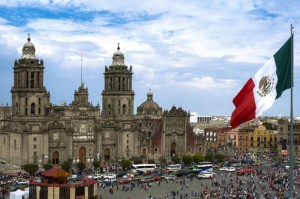 Heavily Jewish districts of Mexico City, such as Polanco, Lomas de Chapultepec, Bosques de las Lomas and Interlomas have erected a new eruv to allow for carrying on Shabbos. According to Spanish-language news site Diario Judio, the Ashkenazic community announced in early December 2014 that the eruv would be established. In collaboration with Federal District and State of Mexico authorities, the eruv took roughly a year to complete.

Between 40,000 to 50,000 Jews currently live in Mexico, making it the third-largest Jewish population in Latin America, surpassed only by Argentina and Brazil. According to an article by Aish.com’s Dr. Yvette Alt Miller, the roots of the Mexican-Jewish community go back at least five centuries, beginning with Hernan Cortes conquer of Mexico in 1521. According to Miller, when Cortes conquered Mexico, “he did so with a number of secret Jews amongst his men. Judaism was banned at the time in Spain, and soon many secret Spanish Jews departed for “Nueve Espana” in the New World to try and live a more Jewish life. In fact, Spain’s first Viceroy in Mexico, Antonio de Mendoza, possessed a Jewish surname, and historians suggest he was possibly one of the secret Jews who moved to the new territory.”

“Jews were…pursued throughout Mexico. “Suspicious” activities that could brand someone a Jew included bathing on a Friday and afterwards putting on clean clothes; draining and disposing of blood after slaughtering a bird to eat; fasting on Yom Kippur; eating tortillas (which are unleavened) during Passover; and circumcising sons. Anyone guilty of these “crimes” faced drastic punishments including torture, imprisonment, forced wearing of a san benito, a knee-length yellow gown, or a dunce-cap, and execution.”

According to Dr. Miller, today, “Jewish organizations reach every corner of the [Mexican] community’s life, providing independent ambulance services, welfare organizations, social groups – even a dedicated anti-kidnapping response group.” Dr. Miller also points out the low rate of anti-Semitism in the country, with then-President Vicente Fox passing an anti-discrimination law in June 2003. According to community leader Renee Dayan-Shabot, who was in the Mexican Senate when the law was passed, “It came time for any arguments against the law. And there was complete silence.”