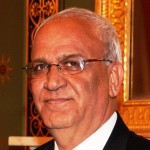 Speaking at a Rome conference on Mediterranean security and quoted by AFP, Erekat claimed that the radical jihadism of Islamic State could only be defeated long-term through a resolution of the Palestinian question and the establishment of democracy in Arab countries.

“Ever since the beginning of Islam there have been people and organizations seeking to use the religion for their own ends. Daesh is number 803,” he said, using the Arabic acronym for ISIS.

“You are not going to defeat Daesh with bullets, warplanes and so on,” said Erekat, who then went on to claim that the anger that fuelled support for groups like ISIS was undermining people like him who had attempt to negotiate peace with Israel and had been treated instead to the “expansion of Israeli settlements”.

“For 23 years I promised Palestinians we would have our freedom and dignity. What did I bring my people? Instead 200,000 settlers we now have 600,000 and an Israeli Prime Minister who prides himself on saying ‘there will be no Palestinian state on my watch,’” he charged, according to AFP.

“If we go down as Palestinian moderates, if we cannot deliver, mark my words this will be the scenario.

“At the moment ISIS are seen as a causeless bunch of criminal terrorists. Nobody is associating with them.

“If tomorrow they fill the gap of me and (Palestinian Authority chairman Mahmoud) Abbas and they start killing Israelis, who amongst one billion Arabs will be against it?” threatened Erekat.