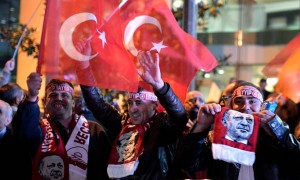 President Recep Tayyip Erdogan rose from humble beginnings to become Turkey’s most powerful politician since Ataturk, but after more than a decade at the top he remains its most divisive.

Adored by his supporters as a transformative figure who modernised Turkey, he’s seen by critics as an increasingly despotic leader who harbours ambitions to establish “one-man rule”.

Erdogan’s dream of expanding his powers to become a more US-style executive president could be closer to reality after his Justice and Development Party (AKP) regained its parliamentary majority in a surprise comeback on Sunday.

The 61-year-old first came to power as prime minister in 2003, bringing stability after a history of coups and rocky coalitions and dragging the Muslim majority country out of an economic quagmire.