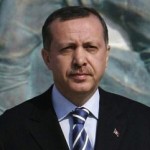 Addressing hundreds of thousands of supporters at his biggest rally so far ahead of the Aug. 10 election, Erdogan again likened Israel’s actions to those of Hitler, comments that have already led Israeli Prime Minister Benjamin Netanyahu to accuse him of anti-Semitism and drawn rebuke from Washington.

“Just like Hitler, who sought to establish a race free of all faults, Israel is chasing after the same target,” Erdogan told the sea of cheering supporters at an Istanbul arena. “They kill women so that they will not give birth to Palestinians; they kill babies so that they won’t grow up; they kill men so they can’t defend their country … They will drown in the blood they shed,” he said.

Leave a Reply to not impressed Cancel reply