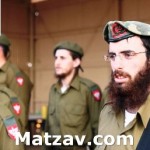 In light of the ongoing terror and its focus on the chareidi public, Israeli Public Security Minister Gilad Erdan is initiating the distribution of certificates for weapon-carrying for chareidi IDF graduates who live in chareidi neighborhoods and communities.

“This initiative will provide a solution to the existing lack of weapons in chareidi population centers,” said Minster Erdan. “Civilians who are skilled in operating weaponry are a force multiplier in our struggle against terror. Therefore, I have acted to ease the restriction for weapons carrying for the chareidi public as well, which is the main target of the heinous murderers.”

Minister Erdan has initiated the move in the last few days due to the large number of attacks in the recent months against chareidi population centers, where there is very minimal access to weapons, in order to shorten the response time in those areas and avoid harming civilians as much as possible.”

As part of the process initiated by the Minister, Nachal Chareidi will put together a list of IDF chareidi combat graduates who currently live in chareidi neighborhood and towns. This list will be inspected by the Israeli police and, under its recommendations, graduates will be given licenses to carry weapons.

The move joins a list of exemptions obtaining a gun license that came into effect at the initiative of Minister Erdan last October.

Col. (ret.) Yonatan Branski, Director General of the Nahal Chareidi Foundation, said: “We grateful to minister Erdan and to Rotem Peleg, CEO of the office of Public Security for their fast and efficient engagement on this issue. Since the current wave of terrorism began, we have received dozens of requests from Nachal Chareidi graduates who wish to aid in light of the fact that they have experience in the use of weapons. We hope and pray that this move will unnecessary, although, in case the terror continues, this move might be able to save many lives.”