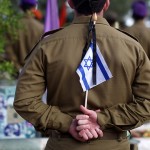 IDF Soldiers whose Jewishness is in question will no longer be buried in a separate section of the military cemetery on Mount Herzl, after Defense Minister Moshe Ya’alon recently signed off on an amendment to the procedure governing military burials.

The issue came under the spotlight nearly years ago, when in April 2013 then-IDF Chief of Staff Benny Gantz conducted a traditional Memorial Day ceremony at the military cemetery.

As per tradition, Gantz had intended to lower the Israeli flag over the grave of most recent IDF casualty, and did so at the burial place of Lt.-Col. (res.) Shlomo Nitzani, who had died six months previously.

However, the actual most recent IDF casualty was Pte. Yevgeny Tolochko, who was buried in a separate section of the cemetery reserved for soldiers whose Jewishness is in doubt.

Immediately after the story about Tolochko’s being ignored came to light, Gantz expressed his regret and the procedure was changed. The amendment, however, was far from sufficient.

In response to the ongoing affair, MK Elazar Stern of Yesh Atid submitted a private bill that sought to remedy the situation and lead to a shared cemetery. Stern claimed that the state of affairs was a blow to national unity.

The matter was finally brought to a close with Ya’alon’s amendment of the procedure.

Bedouin and Christian soldiers will continue to be buried separately, at cemeteries for their respective communities.

According to the new procedures, Jewish and non-halachically Jewish soldiers will now be buried in the same section of the cemetery by the relevant authorities, although not next to one another.

Fallen soldiers whose Jewishness is under question will be buried “four cubits” – or two meters – away from where halachically Jewish soldiers are interred. It is the hope of the IDF and security establishment that the new rules will bring an end to discrimination and to the upset suffered by the families who feel humiliated by having their relatives buried in a separate section of the Mount Herzl cemetery.

“To my great joy, an amendment was signed which stipulates that a non-Jewish soldier buried in the military ceremony will be buried in the same order as all soldiers, which is according to when they fell,” Stern said on Wednesday.

“This change demonstrates the complexity of Israeli society, and the separation burials were a statement saying that they are ‘other,’ ‘different from us,’ and it’s important to send a message of cohesion and brotherhood,” Stern added.