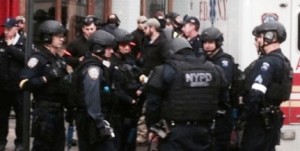 Hundreds of emergency responders converged on a lower Manhattan subway station Sunday morning — but it was only part of a test.

The NYPD, FDNY and Homeland Security held a three-hour active-shooter drill at the Bowery subway station.

Police blocked off the area near Kenmare and Broome streets while they went down into the closed station, CBS2’s Ilana Gold reported.

The scenario: Two officers initially respond to a report of a man with a gun on the platform and call for backup. After there is a mass callout, emergency responders face many dangerous mock surprises and the possibility of several shooters.

Outside the station, cops with black helmets and heavy-duty vests could be seen with K-9 units, and there were police and fire vehicles lining the streets, WCBS 880’s Peter Haskell reported.

The drill was planned before the Paris attacks.

“Today’s exercise was designed to test the coordination between our resources as well as the Fire Department,” Bratton said.

“In New York City, we are, at this time, very well prepared and continually improving that preparedness.”

Officials will review video of the drill to see what, if any, changes should be made.

“You see more coordination, more teammwork than ever before,” de Blasio said.

The Department of Homeland Security provided funding for the drill because of concern that a lone wolf could attack in the U.S.

“We know of no specific credible threat of a Paris-like attack directed at the U.S. homeland,” Johnson said. “We are and we continue to be and we have been concerned about copycat-like attacks.”