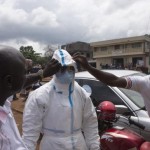 A United Nations trust fund seeking nearly $1 billion for rapid, flexible funding of the most urgent needs to fight Ebola in West Africa has received a deposit of just $100,000 nearly a month after it was set up.

The U.N. Office for the Coordination of Humanitarian Affairs said on Sept. 16 that $988 million is needed to tackle the deadly hemorrhagic fever over the next six months. Since then $365 million has been committed to stop Ebola in Liberia, Sierra Leone and Guinea, which have been hit hardest by the epidemic.

Nearly all that money was donated directly to U.N. agencies and nonprofits working in West Africa with just $100,000 paid by Colombia into the trust fund set up by U.N. Secretary-General Ban Ki-moon, according to U.N. records.

Some diplomats and officials said many donors had made commitments to U.N. agencies before the trust fund was established. Others said donors were already overstretched and suggested they might be wary of how money put into the trust fund would be spent.

“This is a very serious problem,” Ban said of the lack of money in the trust fund. He said that while he appreciated the support given to the U.N. Ebola response so far, it was time more countries with the capacity to help increased assistance. “It’s time that those other countries who really have capacity, (that) they would provide financial support and other logistical support,” he told reporters. Read more here.