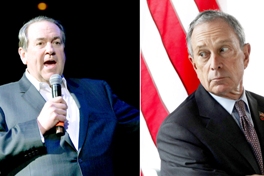 The Post, wrote, “The Israeli newspaper Haaretz scored a huge scoop on Monday, reporting that former Mayor Mike Bloomberg was in the Middle East and had denounced Palestinians for failing to seek peace with Israel. Only one problem: It was the wrong ‘Mike.'”

In tweeting out his comments, the quote was attributed to @MikeBloomberg, instead of @GovMikeHuckabee. The mistake was quickly corrected to reflect the appropriate Twitter handle.

“As long as textbooks of the children of Palestinians celebrate the death of Jews… you cannot negotiate, you cannot talk about peace if one of the parties has no intention of a peaceful resolution,” Huckabee told reporters at the Bible Lands Museum in Jerusalem.

Huckabee, a Southern Baptist and past Republican presidential candidate, was leading a group of Christian pilgrims on his annual trip to Israel.