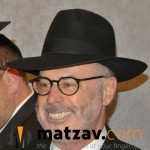 When the ash rained down during the Holocaust and it seemed the terror would never cease, faith was sometimes the one thing a Jewish concentration camp inmate could hold onto.

That faith represents the heart of a book that Elly Kleinman, founder and president of the Brooklyn-based Kleinman Holocaust Education Center, presented to Pope Francis last month during an audience at the Vatican.

The book symbolizes the center’s mission to raise awareness of the Orthodox Jewish perspective and experience during the Holocaust, said Kleinman.

“You wouldn’t think people in the camps would be worried about religious matters, but some decided that if they could keep their faith intact that would help them survive,” said Kleinman, a son of Holocaust survivors.

Kleinman traveled to the Vatican last month to meet with Pope Francis, as well as with the prefect of the Vatican Secret Archives Monsignor Sergio Pagano, Father Norbert Hoffmann, the secretary of the Commission of the Holy See for Religious Relations on the Jews, and Cardinal Kurt Koch, president of the Pontifical Council for Promoting Christian Unity.

“It was an exhilarating visit. He [Pope Francis] was extraordinarily warm and seemed interested in what I had to say. He asked me a lot of questions about what we’re doing at the center,” Kleinman told The Times of Israel.

The gift book, created especially for the Pope, is written in five languages: English, Hebrew, Spanish, Italian and Latin. It focuses on one of many question-and-response exchanges between rabbis and their faithful that took place in the Jewish ghettos of Europe during World War II and in the concentration camps.

“You can imagine in a world turned upside down, where everything is scary, where everyone is marked for death, where there seems to be nothing but choiceless choices, that some held on to their faith. Some lost their faith, but many held on,” said Dr. Henri Lustiger-Thaler, senior curator at the Kleinman Holocaust Education Center, who conceived the idea for the book.

Set inside Auschwitz-Birkenau, the book tells the true story of a conversation between Rav Zvi Hirsch Meisels and Akiva Mann, a teenager who wishes to trade places with a young Torah scholar who was selected for the gas chambers. Mann argues that the scholar’s life is more precious because he can become a Jewish leader in the community should he survive. He tells the rabbi he has the money to ransom the scholar. His only concern is that after he is killed, his death would be considered a suicide, thus barring him from entering heaven.

The rabbi tried to dissuade Mann, explaining such a sacrifice would violate halachah. Resolute, Mann ransoms the scholar. It’s an act he believes will ensure his death has meaning.

“It showed amazing agency. He knows death, he’s no longer afraid of death. He wants to stay true to his identity. When everything else has been taken away, he holds onto it,” Lustiger-Thaler said.

Judith Ivry, a New York bookbinder who uses a 17th century bookbinding technique, crafted the book. It’s actually the second time Ivry has worked on a project for Pope Francis. The first was a presentation box for a book about Chagall, given to the pope by the American Jewish Congress.

For the Kleinman center book she worked to figure out the design with Lustiger-Thaler and Peter Kruty, who printed the text in letterpress.

“Between the three of us, we determined this was a pope that wouldn’t want something ostentatious,” she said.

With that in mind Ivry covered the book in blue leather with gold embossing. She then encased it in a clamshell box covered in blue Japanese Asahi silk, the color chosen to symbolize Israel.

For Kleinman the book represents what he hopes is the beginning of a long-standing relationship with the Vatican. There are already plans to return to Italy and begin to research Holocaust-era documents, which are housed in the Secret Archives.

“I think the world is a better world when all human beings communicate with each other, whatever their differences are,” Kleinman said.