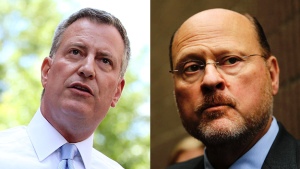 The Big Apple is getting ready to select its first new mayor in a dozen years.

Today, Election Day, is the start of New York”s goodbye to Mayor Michael Bloomberg, who has led the city since 2001, launching a jihad against large sodas, among other things.

De Blasio is up nearly 40 points in the polls and is likely to become the first Democrat elected mayor of New York since 1989.