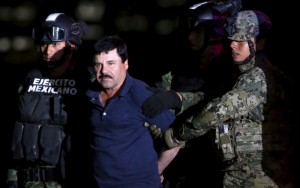 The Mexican government launched the process of extraditing Joaquin “El Chapo” Guzman to the United States, according to a statement from the country’s attorney general’s office.

The 58-year-old head of the Sinaloa cartel escaped from a maximum-security prison in July and was recpatured Friday. It was the second time he broke out of jail.

Mexico is also considering an investigation of actor Sean Penn, who secretly interviewed Guzman for a Rolling Stone article after his jail break. Unnamed Mexican officials have said Penn’s meeting helped to track down the fugitive. Read more at BBC News.