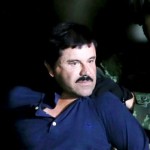 Mexico has sent drug kingpin Joaquin “El Chapo” Guzman back to Altiplano prison – the same one from which he escaped six months ago. Guzman was captured on Friday by the Mexican government after several months on the lam.

ABC News reports that Guzman’s desire to make a movie of his life led to his capture. According to Mexico’s Attorney General Arely Gomez, Guzman’s people even contacted actors and prodocers, which helped authorities pinpoint Guzman’s location. Read more at ABC News.