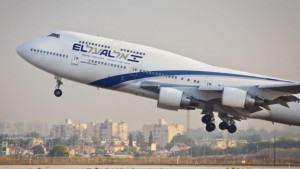 An El Al Israel Airlines flight from Tel Aviv to Los Angeles made an emergency landing in Montana on Sunday after the pilot received an automated alert that the aircraft’s engine was on fire, transportation officials said, Reuters reports.

Reuters reports that the pilot grounded the plane after a cockpit warning light switched on, indicating a fire in the right engine, Glancy said. After the plane landed, fire and transportation officials examined it but found no sign of smoke or fire.