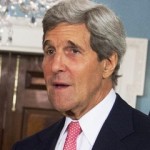 With Hamas reeling from Israel’s military strikes, Secretary of State John Kerry is rushing to the Middle East–to try to get Israel to cease firing.

Bad move. Rescuing Hamas should not be on America’s agenda.

The vaguely pro-Israel rhetoric emanating from the White House in the first days of the war helped keep Congress and the American Jewish community from criticizing the Obama administration. But it did not reflect the administration’s true feelings.

We know what Secretary Kerry thinks, thanks to yet another one of those I-thought-the-microphone-was-off moments that have become a staple of American political life in recent years.

Moments before his July 20 appearance on Fox News Sunday, Kerry, not realizing his microphone was “hot”, spoke frankly to his assistant Jonathan Finer, revealing his true feelings about Israel. Referring to the killing of Israeli soldiers by Hamas, Kerry said to Finer, “I hope they don’t think that’s an invitation to go do more. That better be the warning to them.”

Kerry’s instinctive response was not sympathy for the Israeli victims, or anger at the Hamas killers, or frustration at the Palestinian Authority’s collaboration with Hamas. No, his immediate reaction was to worry that Israel might “do more” against Hamas. His hope is that the Hamas terror will be “the warning to them [the Israelis] to stop striking at the terrorists.

Israel’s efforts to spare Palestinian civilians have been unprecedented in the history of warfare. They have forfeited the element of surprise by announcing to the Palestinian populace where the next Israeli actions will be. They have dropped leaflets over targeted areas. They have telephone residents to warn them to get out of the way. No other army in the world would behave this way.

The Washington Post reported on July 21 that Israel’s advance warnings to the residents of the Shijaiyah neighborhood were what led to the killing of 13 Israeli soldiers there:  “The Israeli military had warned residents a few days earlier of the impending push into the neighborhood…The militants used that information to their advantage. ‘They knew exactly where to wait for us,’ said [an Israeli] official…”

And what does Israel get in return for this sacrifice?  Sarcastic jabs from Barack Obama’s Secretary of State about how Israel’s actions are not “pinpoint” enough.

Kerry’s perspective is apparently filtering down to his underlings at the State Department. Undersecretary Richard Stengel was caught this weekend sending a tweet under the hashtag “UnitedForGaza.”

Israeli Prime Minister Benjamin Netanyahu has said repeatedly that the Gaza conflict must end not with another cease-fire, but with the international community demilitarizing Gaza. Likewise, Tony Blair, the former British prime minister who is now the Quartet’s envoy to the Middle East, said on Israel Television’s channel 10 on July 15 that there needs to be a “long-term plan for Gaza that…deals with the real security requirements of Israel in a permanent way…Hamas cannot carry on with the military infrastructure that it has.”

Netanyahu and Blair are right. Gaza must be stripped of its 10,000 rockets, armed drones, weapons depots, missile-making laboratories, and terror tunnels.

The Kerry demand for a cease-fire is not just insufficient. It actually endangers Israel. It undermines Israel’s war effort, and would give Hamas another chance to rebuild, to re-arm, to prepare for the next phase.

Serious international pressure and sanctions forced Syria to begin dismantling its chemical weapons last year. British pressure and steadfastness resulted in the disarming of the IRA terrorists. Gaza should be next in line.

The eighth lesson from the Gaza war:  Hamas is on the ropes. Kerry shouldn’t try to rescue them. America should be supporting their defeat and demilitarization.