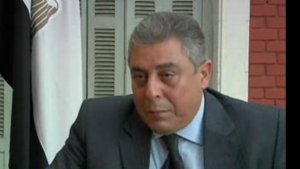 Egypt has sent a new ambassador to Israel after a three-year hiatus, Israel’s Foreign Ministry said.

The ambassador, Hazen Khairat, arrived in Israel on Friday.

“I welcome the re-stationing of an Egyptian ambassador in Israel, which will enable us to further strengthen relations with this important and key Arab country,” Israeli Prime Minister Benjamin Netanyahu said Sunday.

Egypt withdrew its previous envoy to Israel in November 2012 in protest of Israel’s Operation Pillar of Defense military campaign in the Gaza Strip.

Relations between Israel and Egypt have improved following the military removal of Islamist president Mohamed Morsi in 2013 and the ongoing tenure of a new president, Abdel Fattah El-Sisi, who has cracked down on the Palestinian terror group Hamas and its parent organization, Egypt’s Muslim Brotherhood.