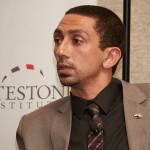 An Egyptian-Muslim peace activist expressed strong support for Israel this week and called on major media outlets to halt their biased coverage of the Jewish state.

In a video posted on Facebook, Ahmed Meligy criticized the media’s “dishonest reporting” and “brainwash methods” in relation to the current wave of violence in Israel. Filming from Egypt, he spoke to the camera with Israeli and Egyptian flags hanging on the wall behind him. After proclaiming his passion for his home country, the activist said he hung the Israeli flag as well because Israel has the right to be recognized “in a proper, decent, honest way.”

Meligy specifically mentioned the BBC and The Washington Post for “undermining what’s going on in Israel to the point that they are trying to bury it, so the world won’t know.” He cited specific headlines from both media outlets, which report on Palestinians being killed, but fail to identify them as terrorists and attackers.

The Egyptian activist urged the public to become the “true news reporters,” saying, “It is our duty to act and show the world what’s going on in Israel.”