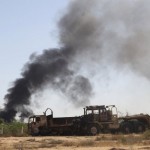 Secret’s out. Egypt and United Arab Emirates have joined forces, clandestinely launching two airstrikes in the past week to hit Islamist militias trying to take control of Tripoli, Libya. The attacks were carried out without the United States’ knowledge, officials say, and Egypt specifically kept the operation from American diplomats.

The first strike killed six people and blew up a small weapons depot, and the second hit larger weapons, vehicles, and a warehouse. Islamist forces took the Tripoli airport and claimed the city on Sunday. Read more at The New York Times.