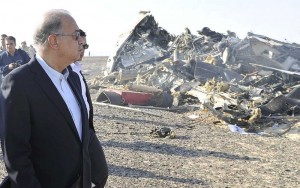 Some of the debris from the Metrojet plane that crashed in the Sinai Peninsula is still missing one week after the crash, Egypt announced today.

Ayman el Mokadem, the head of Egypt’s committee into the crash, briefed reporters and did not specify what pieces were missing. Mokadem said no determination has been made on what brought down the jet yet, though it has been determined that the Airbus 321 broke up in mid-air.

Mokadem said the committee has not receieved any of the purported intelligence from the United States and United Kingdom that both countries have said leads them to believe a bomb was possibly or likely placed aboard. The U.S. intercepted a message between members of a branch of ISIS talking about “something big in the area” prior to the crash. Read more at the New York Times.