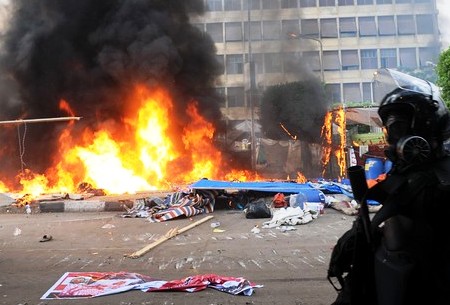 Egypt’s efforts to end Muslim Brotherhood protests turned deadly Wednesday morning, with well over 100 people killed across the country in violence set off when police, later backed by Egyptian soldiers, moved in against two antigovernment sit-ins in Cairo.

The move to clear supporters of former President Mohammed Morsi, which had been anticipated since his ouster by the miltary on July 3, set off violent upheaval across Cairo. Protestors tried to storm police stations across Egypt’s capital, while entire neighborhoods succumbed to fighting between neighbors on opposite sides of the political divide, an early taste of the bloodshed that has been feared for weeks by many Egyptians. Several observers worried that the violence has spiraled out of control and taken on sectarian shadings.