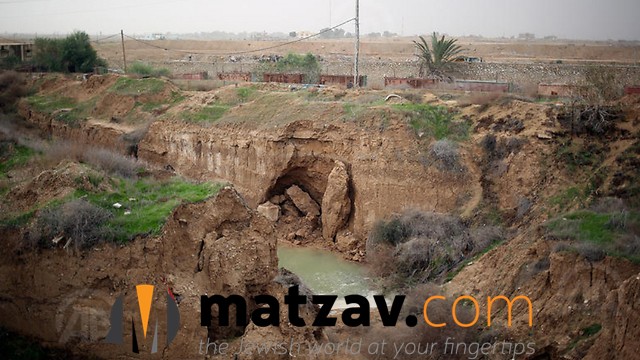 Egyptian border guards discovered a first of its kind underground tunnel network made of iron under the country’s border with Gaza this past week, according to Egyptian security officials.

The tunnel was discovered at a depth of 10 meters near the northern part of the Rafah crossing, which connects the Gaza Strip to the Sinai Peninsula.

The Egyptian officials said the tunnels were discovered when water that had been pumped from the ocean to flood the tunnels on the border, as the Egyptians have been doing in recent weeks, failed to seep into the ground. Security officials realized that something must have been blocking the water from being absorbed, and thus discovered the network of tunnels.

Egyptian engineering forces promptly began excavations in the area and discovered an iron tunnel at a depth of 10 meters. A quick examination of the tunnel revealed that its walls were made of 40cm-thick iron.

The Egyptian officials said that building such a tunnel would be an extremely expensive endeavor.

According to Egyptian intelligence, the advanced tunnel network includes some 17 iron tunnels from Gaza, which are meant to service Hamas and other armed groups in their fight against the Egyptian flooding operations against the tunnels.

Egyptian news portal al-Masrawi reported that Egyptian officials believe Hamas was behind the construction of the tunnels, using considerable funding come from Qatar.

Hamas has previously voiced its disdain for the flooding campaign, saying that the operation further tightens the blockade against the Gaza Strip, while the Rafah border crossing does not open consistently.

The Egyptian president, for his part, clarified in recent meetings with officials from the Palestinian Authority that the measures taken by the army are meant to secure the border between Egypt and Gaza, for the sake of Egyptian national security. According to him, the steps cannot hurt “our Palestinian brothers in Gaza.”

Pictures from the border area posted to social media in recent days already show cracks beginning to form in the ground due to the massive amounts of sea water being pumped into the ground.

Dr. Yuval Arbel, a groundwater expert from Friends of the Earth Israel, told Ynet that “It’s hard to accurately assess what’s going on from the pictures, but it is clear that if they are flooding the tunnels on such a massive scale, it will cause depressions and cracks in the ground, and may even lead to ground collapses and damage resources.

“The fact that they are using salt water to flood the tunnels means that they are likely to cause damage to the aquifers in the area, as the salt water will raise salinity in the well water,” he added.