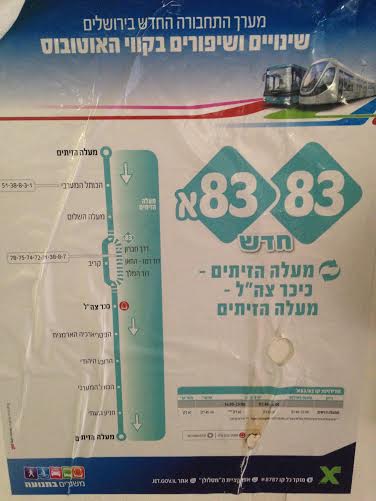 In a major sign of improving security on Har Hazeisim, the Egged Bus Company recently inaugurated regular bus service to the Har Hazeisim area. The new 83 and 83 A lines begin in the center of the city and make stops at such landmarks as the Kosel Maaravi, Jewish Quarter, and Har Zion before making their last stop at Maale Hazeitim, just across the road from Har Hazeisim.Bus service begins daily at 7:40 in the morning and continues almost hourly until 11 p.m.

“This is a big day for those of us who have worked to make Har Hazeisim more accessible to Jews who wish to visit this holy site,” said Avrohom Lubinsky, Chairman of the International Committee for the Preservation of Har Hazeisim (ICPHH). He added:  “The new bus service is much more than just symbolic; it is a confirmation of the improving security situation on Har Hazeisim. This will hopefully encourage people to visit their loved ones and the many tzaddikim who are buried there,” he said.

Mr. Lubinsky reported that in recent weeks security has been significantly upgraded with increased patrols from police and border patrol units in the Har Hazeisim area. He also revealed that a new government contractor was providing daily maintenance and clean-up services on Har Hazeisim.  “These are encouraging developments in our efforts to secure Judaism’s holiest and oldest cemetery with its 150,000 graves,” said Mr. Lubinsky.

The ICPHH head congratulated Egged for “taking this bold step to make Har Hazeisim accessible to mourners and visitors.”  He said that the ICPHH has made numerous overtures over the years to improve access to Har Hazeisim but it wasn’t until now that Egged acted. Mayor Nir Barkat had on numerous occasions vowed to improve access to the holy cemetery, including extending the light rail to Har Hazeisim and even eventually launching cable car service to the area.

Founded in 2010, the ICPHH has worked tireless to preserve the national cemetery of Klal Yisroel. Its accomplishments include the installation of 142 surveillance cameras, the establishment of a police sub-station and the completion of many infrastructure projects. In addition, the ICPHH successfully lobbied the Knesset and the government to introduce tough new laws against rock throwers which the Committee hopes will serve as a major deterrent. Amongst its plans for the future are gating of areas that have been subject to vandalism, the restoration of thousands of graves destroyed during the Jordanian occupation, the construction of a Visitor’s Center and shul, and numerous other projects.