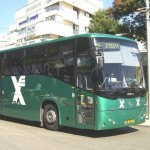 Employees of Egged Israel Transport Cooperative Society Ltd. will strike the company’s buses throughout Israel on Monday, following a dispute with Egged management.

According to the Histadrut (General Federation of Labor in Israel), the main bone of contention in discussions between the workers and Egged management is that Egged drivers are likely to receive the lowest hourly rate of pay in the Israeli public transport sector. “In addition to Egged management’s refusal to update the drivers’ pay, management is taking unilateral economizing measures that violate the workers’ legal and contractual rights,” the Histadrut alleges.

The Histadrut announced that in an effort to prevent unnecessary harm and out of a feeling of responsibility to travelers, especially soldiers, it was decided that the strike would not begin on Sunday, the busiest day for public transport.

Histadrut Transport Workers Union chairman Avi Edri said, “It is out of the question for Israel’s leading transport company to pay the lowest hourly rate in public transportat, and also to unilaterally cut the workers’ pay. We intend to employ all the means at our disposal to maintain the salaries, honor, and status of Egged employees.”

The Egged workers committee chairman said, “We are in a struggle, because the workers can no longer be treated with comtempt, and unilateral measures cannot be taken at their expense. Enough of this callousness. We expect the most experienced drivers in Israeli public transport to be able to make a respectable livelihood and make ends meet at least as well as the workers at the other public transportat operators. We hope that management will come to its senses and take immediate action to resolve this crisis before the drivers and the public suffer real damage.”

Egged spokesman Ron Ratner said in response, “The threat of a strike by the workers and the Histadrut arises from agreements reached recently between the government and the independent public transport companies, agreements that do not include Egged drivers, and that will lead to a rise in drivers’ pay, financed by the Ministry of Finance.

“In the negotiations that have taken place over past few days, the workers and the Histadrut were presented with solutions, among them a commitment that the pay of Egged drivers will not be less than the norm in the industry. It was made clear that the workers’ demands can only be dealt with in the framework of the new agreement between Egged and the government, which is currently being negotiated.

“On the basis of the commitment given to the workers and the Histadrut, we call on the workers to refrain from an unnecessary strike the only outcome of which at this juncture will be severe harm to passengers and Egged’s customers.”