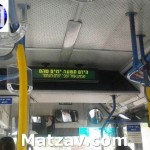 In an article titled “Slippery Slope,” Idan Yosef, a commentator at the News1 website, criticized Egged for catering to its religious passengers. “Public transportation cannot be allowed to present information that ignores entire populations,” he wrote

“Including a message that says ‘Happy Holiday'” is iffy enough, Yosef continued, “but it can be accepted, as long as it appears on Israel Independence Day and is shown on buses in ultra-Orthodox neighborhoods.”

The chareidi community generally does not celebrate Israeli Independence Day.

In recent years, Egged installed digital displays on its fleet of vehicles that notify passengers what the next bus stop is, what other buses were available at a particular destination, estimated times of arrival, etc.

The sign system is also used to wish passengers well during various Jewish holidays. It was the first time Egged buses posted messages related to the Omer.

Egged decided to shut down the program. The company did not respond to a request for comment.