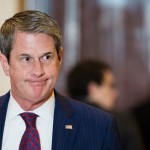 The race was expected to be a tight one, but long-time politician Vitter was beleaguered by his 2007 prostitution scandal as well as allegations that his campaign had secretly recorded opponents.

For a sense of how steep his defeat was: In a deeply Republican state, Vitter was reportedly losing to Edwards by a fairly wide margin even before the liberal city of New Orleans had its votes fully reported.

While conceding the race to Edwards, Sen. Vitter also announced that he will not seek re-election in the U.S. Senate. Read more at The Advocate.