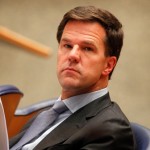 Dutch Prime Minister Mark Rutte and members of the Dutch parliament urged PA President Mahmoud Abbas to call on his population to stop violence against Israelis, during Abbas’ visit to The Netherlands this week.

Members of the Dutch parliament said that Abbas condemned violence “behind closed doors,” but MPs Hans ten Broeke, who leads the VVD (Liberal) group, stressed that Abbas also needs to make such a statement in Arabic to his own people.

Parliamentarians from the Opposition ChristenUnie party noted that Abbas glorifies “violence when he names streets and squares of the West Bank after terrorists.”