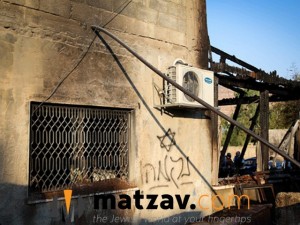 As the investigation into the Jewish-led arson attack in Duma reaches its final stages, and amid allegations of torture used against the suspects by the Shin Bet, it has been revealed that Israel’s Deputy Attorney General, Ram Nizri, recently visited the suspects and questioned them about their condition, both physically and mentally, as well as the way they had been treated by their interrogators, Jerusalem Online reports.

Nizri, one of the highest-level officials in Israel’s legal system, arrived at the Shin Bet facilities and met personally with the suspects, who are believed to have burned the house of the Palestinian Dawabsheh family five months ago, killing three of the family members including an 18-month-old infant.

Over the past weeks, since the suspects were arrested by the Shin Bet, an unprecedented campaign was launched by right-wing activists accusing the Israeli security agency’s interrogators of implementing violent methods against them.

Last week, senior security officials clarified that certain measures, which they defined as “uncommon,” had been approved for use against the suspects, including subjecting them to physical stress. The officials stated, however, that all of those measures had been carried out under complete supervision by the legal system and the Attorney General.

At least two suspects are expected to be indicted this week and charged with murder.