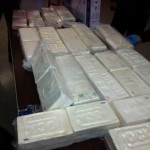 Mark Soto and Xavier Herbert-Gumbs were arrested in New York City on Saturday after authorities discovered 136 pounds of cocaine in their possession,worth around $3 million.

According to the Special Narcotics Prosecutor in New York, the individuals had transported the cocaine from Massachusetts.

The prosecutor called it “largest cocaine seizure” it had made in recent years. Read more.