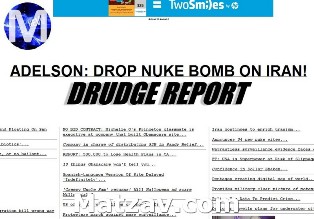 During a panel at Yeshiva University last Tuesday evening, Sheldon Adelson, noted businessman and owner of the newspaper Israel Hayom, suggested that the US should use nuclear weapons on Iran to impose its demands from a position of strength.

Adelson’s comments were widely reported by Various websites, including all the popular frum online media outlets, including Matzav.com.

However, Drudge Report, widely viewed as the leading aggregator of news, didn’t pick up on the story until early this morning. Drudge featured a blaring headline, stating, “ADELSON: DROP NUKE BOMB ON IRAN!”

The remarks were made days ago, Tuesday evening, and were reported on the next day or Thursday, yet Drudge failed to report it until today. Is Matt Drudge losing his touch?