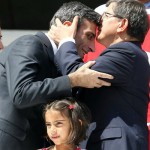 Dozens of Turkish hostages, who were kidnapped over three months ago by ISIS, were freed today. 46 Turks, including Consul General Ozturk Yilmaz and his family, were abducted from the Turkish consulate in Mosul in June, along with three local Iraqi employees. All have since been freed, though it is unclear how.

“I thank…every single member of the national intelligence agency from the director to the field operatives,” he wrote. “I congratulate them for their big success from the bottom of my heart.”

Prime Minister Ahmet Davutoglu called the rescue a late-night operation. “At around 11:30 at night, this rescue effort reached its final stage,” Davutoglu said. “Be assured that for months we worked toward this. I thank those in our national intelligence agency who worked relentlessly and with great sacrifice.” Read more at CNN.